RPG help anyone? I may have your help here! 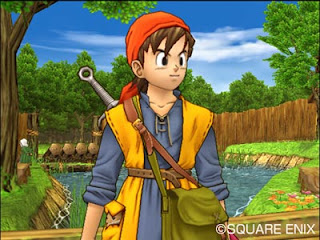 You were once of the King's guards who served in Castle Trodain. That was until the day the curse unleashed by the evil Dhoulmagus froze the Kingdom in time and turned your master, King Trode, into a hideous monster. You were the only one who survived the tragedy unscathed, and so it is up to you to track down Dhoulmagus and find a way to save your beloved King and fellow countrymen.

Yangus's craggy face and rough attitude make it obvious that he was once a bandit just as much as the scars all over his body do. However, due to unexpected circumstances, he ends up joining you, the hero, as a traveling companion. What could you have done to encourage him to reform his life so much? And why does he respectfully call you "guv" all the time?

Despite her casual dress and her inquisitive expressions, Jessica is actually the daughter of a famous family of rural aristocrats. Hidden away within her are the seeds of powerful magic, so she currently studies magic in the hopes of unlocking that power. Jessica is also trying to hunt down Dhoulmagus, and this is why she eventually joins up with you and Yangus. What happened between her and Dhoulmagus to make her want to leave such a comfortable life behind?

Angelo, a Templar who serves to protect Maella Abbey, is gifted with good looks and charm, as well as the most extraordinary silver hair. But why would one who has such noble ecclesiastical responsibilities join up with your mismatched party on a journey without a clear end?

Although he looks like a monster, he is in fact the majestic ruler of Trodain. He was transformed into his troll-like appearance on the day Dhoulmagus cursed his whole kingdom. In order to lift the curse that was placed on his castle and its inhabitants, King Trode sets out on a seemingly endless journey with you, the only person left unscathed by the tragedy. Will poor King Trode ever be able to restore his kingdom and his visage to its former glory?

methinks
by Loving RPGs over a year ago
More...